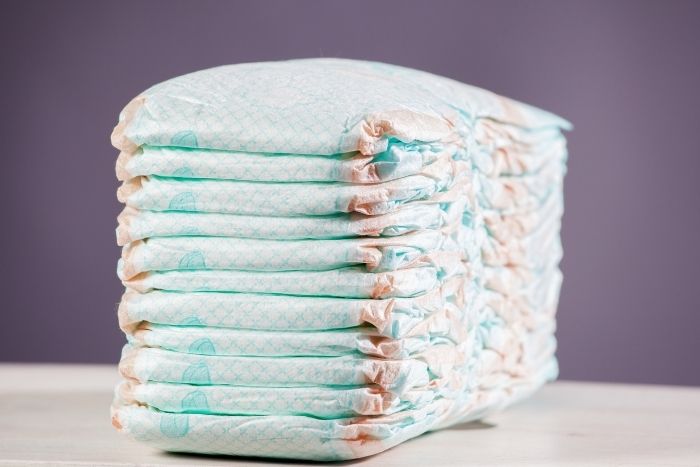 The sleek, white, towering poop holder ignites a passionate response on both sides of the aisle.

People tend to either LOVE the playtex diaper genie…

Or think they’re a ridiculous extravagance!

We’re in the former camp, and here’s why:

We used a diaper pail and trash can for our first kid’s diapers. Since switching to the playtex diaper genie we’ve had way LESS trouble with poop smells, spilt diaper bags, and futzing with emptying it.

Now, we realize that this won’t convince anyone.

And, this post is for folks who are on the fence but leaning towards getting one.

So with that said, let’s dive into 10 reasons we love the playtex diaper genie.

With the playtex diaper genie, your dirty diaper changing hands NEVER have to open a lid. Useful if you’ve ever had to clean up from a diaper blowout.

Since it’s got a foot switch for that, your poopy hands won’t have to touch a surface either.

Contrast this with a diaper pail that you have to pull to open. That’s a pain for several reasons.

First is, with a new baby at home, you’re going to be changing a ton of diapers. Many estimates say you’ll have 8-12 diapers to change a day. It’s mostly due to urination, but that’s still a lot. And that’s a lot of times that you’ve gotta futz with a handle if you don’t have a diaper genie with a footswitch.

You might be holding your baby. Or, holding a diaper full of poop and watching to make sure the kid runs off.

Point is, the playtex diaper genie foot switch eliminates all that.

This means one LESS surface you have to touch before you’ve washed your hands.

With its extendable bag, it can be as long (in theory) or as short as you want. This is handy in case you’ve got a full day of activities planned with not many chances to change a diaper.

Now, generally, you’ll empty it each time the bag touches the bottom…

But in the event you’re tired, busy, or exhausted and don’t take it out to the trash?

There’s extra room in the playtex diaper genie that you can squeeze it down.

If you’re one of the many, many folks who have been working from home during the pandemic (or the 54% that want to continue teleworking), that means you’re probably changing more at home than before the pandemic.

Plus, when you get a HUGE poopy diaper and you want to cut the bag off for only one diaper? You can do that too.

But with a regular trash bag? You’d have to throw out an entire bag.

With a playtex diaper genie, emptying a full diaper bag means only smelling the odors of your house and NOT the poop.

Now, you may have heard of the study that talked about how moms don’t think their own baby’s poop smells as bad as someone else’s. And that’s well in good. But that doesn’t mean you won’t have super stinky diapers to change.

On the other hand, every time we emptied the regular diaper pail it smelled like a trip to the city dump.

With a trash can you get a whiff of poop straight to the face, it gets too full, it’s too wide, and the bag itself isn’t sturdy.

Now, you could buy sturdier garbage bags (that costs more). But if you do that, why not get the diaper genie bags instead?

Plus, one problem we’ve never had (that was common when we used a trash bag) is having it too full to close.

Plus, if you remember you’ll change around 2300 diapers in your baby’s first year, you’ll realize how quickly those smells accumulate!

So think about that. While you might think a trash can will save you money, once you start buying sturdier bags and dealing with smelly headaches, you might feel different.

#4 Not Too Wide, Not Too Skinny

Since your kiddo will be producing so many diapers over the years, it’s helpful to have a diaper genie strategically located.

When we had an old-fashioned diaper pail, we ended up keeping it in the laundry room for quick access to the trash. But the playtex diaper genie is narrow enough to tuck into the bedroom.

It’s about 12 inches wide. That’s enough to hold enough diapers you don’t have to empty it every day, but not so wide that it’s going to take up a ton of space in your bedroom.

When we used the trash can for a diaper pail, each week we had to get in close and personal with the diapers when we took out the trash.

You know how when you have a giant bag of trash sometimes it’s hard to get it closed, or sealed up, or just lift it out of the can altogether?

Imagine dealing with that, but instead of your leftover food in the bag it’s a bunch of poopy diapers.

If you’re not careful the smell of poop will fill your kitchen, your laundry room, and spread throughout your house.

The playtex diaper genie doesn’t eliminate this entirely, but the smell and the structure of the diaper genie, and how you empty it, greatly reduces poopy smells from dominating your house.

This can be really helpful as your baby is teething, drooling, and producing a lot of poop as they get older.

If you’re thinking about getting a playtex diaper genie that means you’re either already changing a lot of diapers, or you will be soon.

The last thing you want to be doing when you’re exhausted, tired, dragging your limbs, and living in brain fog, is futzing around with a trash can overflowing with poop that’s a week or more old.

The playtex diaper genie is made out of plastic. So it’s going to be considerably lighter, even when it’s full, than using a heavy trash can.

This will make your regular diaper genie emptying routine much easier. (P.s. for more parenting hacks check out this post).

It can’t be stressed enough…

While it might seem that refilling a trash can and using that as your diaper pail would be easier, it’s not.

Before we had a playtex diaper genie we were intimidated by the pictures of the refill containers.

Because it’s super simple to refill a diaper genie with the refill container.

While it might seem like it’s easier to just use a trash can, when you’re dealing with poop and old diapers it ends up being more of a hassle.

Plus, when you’ve been up half the night caring for a newborn, the last thing you wanna do is futz with a diaper pail. (More: if you’re dealing with postpartum insomnia, check out Fight Postpartum Insomnia With These 14 Tips).

Playtex diaper genie refills come in rings. And there’s a plastic part that you peel off to get the bag out from the ring. But once you do that you simply tie off the bag, put it in the top holder spot, and thread the bag down into the playtex diaper genie.

And when the bag is full?

You pull it out a bit, use the built-in cutter to cut it, and then tie it off. From there it’s ready to go in the trash!

#8 Satisfaction From Watching Your Diaper Genie GULP A Diaper

If you listen closely you can hear it GULP the diapers down: Nom, nom, nom nom.

When you change a FULL and bulging diaper of smelly poop, sometimes all you wanna do is get rid of it as fast as possible. With the diaper genie you step on the foot switch, it opens its mouth and chomps away – just like cookie monster.

And that sense of satisfaction is something that the diaper genie will bring into your life never diminishes.

#9 It’s NOT A Bougie Trash Can

And using a diaper genie doesn’t mean you’re some sort of mindless yuppie.

People equate it with a trash can because it looks and feels like a trash can. But that’s more of a testament to its excellent design than anything else.

2nd, its features are entirely different. While it feels like a trash can, its function as a unique vessel for trapping in the poo – smells and wetness and all- puts it in its own category altogether.

So all those people who launch arguments with this cheap shot?

Warning: If you’re shopping for one, be careful what you wish for…

You might be ditching your diaper pail and diving into a culture war.

The Oxford language website defines a culture war as a conflict between groups with different ideals, beliefs, philosophies, etc.

Now, as we mentioned in the introduction, people can get very passionate about it!

Mocking the diaper genie – and the people who swear by it- seems to be a popular pastime in online parenting circles.

That’s understandable. Before we had kids we mocked the diaper genie too…

But that’s BEFORE we know how awesome they were. So regardless of how you feel, and if you decide to get one, know that you’ll be choosing to be a part of a mild culture war.

But we’re not exactly sure why!

We spent three years using a regular diaper pail and that stunk. Once we got a diaper genie we never looked back!

We believe if you’re on the fence you’ll end up loving yours too!

For more details, you can check out the info on Playtex’s webiste (non-aff link).

When it comes to the Diaper Genie brand, they’ve actually got several different models (non-aff link).

As always, drop us a comment below and let us know what you love about the playtex diaper genie, or what questions you have!