Listen to this story:

In Maryland a few years ago, some parents got in trouble with the police for letting their kids walk home from the metro without supervision.

Kids who grew up in the 80s might not think this a big deal.

…Turned out they violated the law.

And had to face the consequences. The whole thing caused quite a stir.

Made a big splash in the news.

And, ignited a debate about free-range parenting in all sorts of ways. Now, we’re not here to judge.

To each his own.

But it’s important to educate yourself. Because until we saw this story, we didn’t know anything about free-range parenting either.

That’s why we wrote this article to help others understand.

To start, let’s define what it is:

What Is Free-Range Parenting

It’s a parenting style that’s all about raising your kids to function with little or no adult supervision.

Ultimately, it’s about raising individuals. A noble goal, to be sure.

The free-range parenting approach accomplishes this through progressive levels of activities that foster independence.

There’s all sorts of ways to get there. (That could be a whole essay in itself).

Before diving into that, let’s get some context on where free-range parenting came from.

And talking about this isn’t without some controversy.

Free-range parenting is the opposite (or some might say the antidote) of what’s called “helicopter parenting.”

This is to say: The desire parents have to not hover over their kids. With the rise of helicopter parenting, more and more parents decided they wanted another way.

So now that we have defined what free-range parenting is, let’s talk about one of the most pressing questions people have about it. 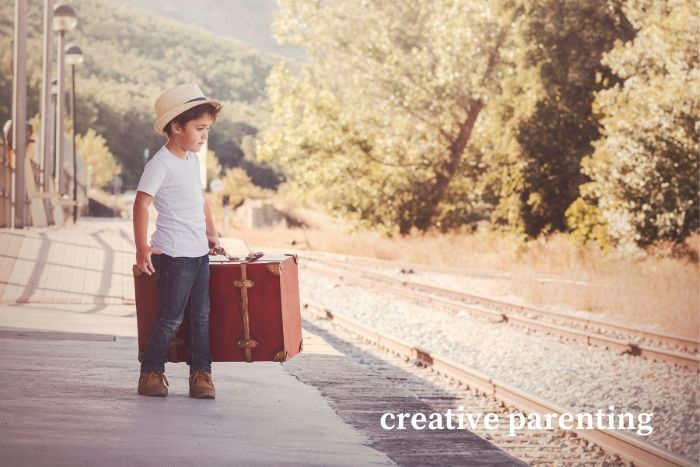 Because free-range parenting is controversial, you can find a million different opinions for and against it.

We think part of the reason it’s controversial is that it relates directly to safety Specifically: How and when kids can be left alone to do things by themselves.

One article brings up several key points often left out of the debate. For example:

And this reminds us of our parents’ style.

When we were kids our parents emphasized being prepared. This boils down to: Anticipating in advance what various safety situations your children could end up in…

And then talking through those situations with them beforehand. This can help them strategize and know what to do if they do end up in that situation.

Plus, it’s good to recognize what your kids can do for their age (and what they’re not able to).

You really can’t expect a very young child to make significant decisions in a crisis, for example.

But at the same time, with older kids, you shouldn’t think that they’re not capable of doing things that they can.

And as parents, we all walk it closely. And that’s part of what makes this topic so difficult.

Another thing to consider:

And I think this is one challenging point for people opposed to free-range parenting, is you don’t know who is spending time with your children.

Even if you do the absolute best job you can as a parent with vetting people, there is still going to be a level of unknown.

And that’s why it’s good to remember that the intent of a lot of protective laws is to help keep children safe.

It seems like this gets forgotten in the debates.

So they just become a back-and-forth between the role of government and the independence of the parents.

And sure, it’s easy to be nostalgic for a time when parenting was more carefree.

But for a lot of kids and parents nowadays, safety is a serious concern.

One article in the Washington Post, for example, mentions that out of 1 million crimes against juveniles, around 250,000 happen outside or in commercial zones.

Now, this isn’t a reason not to consider free-range parenting. But rather, it’s important to remember the context of what we’re talking about and that is this:

The world isn’t what it used to be. For parents and kids.

In some cities, life is more dangerous. It’s maybe not as safe as it used to be for kids to play outside.

Plus, parents are working more.

Maybe they have a longer commute.

Or maybe they have to work a second job to make ends meet.

It’s good to remember when thinking about this topic that for most Americans nowadays, life is not a 1950s lifestyle.

It’s worth highlighting something in the Washington Post article talks about:

Child neglect and child abuse are serious problems in the United States today.

So don’t discount that reality.

Many children today are already living in dangerous circumstances with limited adult supervision.

Now that we’ve talked about some of the discussion points around free-range parenting and safety, let’s look at some statistics.

The statistics around free-range parenting are interesting.

One article by Bloomberg noted that after looking into the research on this topic they didn’t find a whole lot of official research.

Through their own research though they came to their own conclusions about what could be causing the shift.

As the article mentioned:

There really isn’t a whole lot of official research yet.

For now, I am going to leave the section as is but will update going forward.

Now although this is an article all about free-range parenting you might’ve noticed a key challenge with this topic.

And it’s a challenge that I became aware of only after I read more literature about free-range parenting.

So often with the debate, it seems as if it’s just one or the other, either helicopter parenting or free-range parenting.

And that can be frustrating.

Because it doesn’t allow for much nuance.

It doesn’t allow for layers of context with parenting.

But the reality is parenting is a very complicated thing.

And so any discussion about parenting and parenting styles needs to bring some nuance.

So if you’ve felt the tension between helicopter parenting and free-range parenting, then you might like this next topic.

What Is A Lighthouse Parent?

Now, this may be something that you’ve not heard of before.

It’s certainly something that I hadn’t heard about until I started learning about free-range parenting.

But it’s a third parenting style that is an alternative to either helicopter parenting or free-range parenting.

Because there are downsides to those, and I think legitimate critiques to both of those parents models.

The key to this third paradigm is in the concept of a lighthouse.

Think about what it is a lighthouse does.

A reference point for ships navigating in a storm.

Assisting and providing a path from afar.

And so to be a lighthouse parent means to play this role in our children’s lives, rather than hovering over them every moment or abdicating all responsibility to guide them as parents.

The idea comes from Dr. Kenneth Ginsburg, who advocates that:

“Parents should be lighthouses for their children, visible from the shoreline as a stable light or beacon.”

And when you put it that way…

And that’s the concept of being a lighthouse parent.

Now, one article from Romper.com notes that you might be a Lighthouse parent already and not even realize it.

For a lot of parents, what a lighthouse parent is, basically reflects the type of parenting they do instinctually already.

It’s not some big mystery.

Is simply a reflection of how they see their role as a parent.

Now, this isn’t to say that helicopter parents, or free-range parents don’t also see what they’re doing as the best approach for their kid.

I think it’s generally the case that most people just want the best for their children.

It’s just that for folks who are drawn to lighthouse parenting, it’s because they have become disillusioned with the popular parenting frameworks that are so often the norm today.

One of the things that comes up around free-range parenting is whether or not laws should be passed.

The various debates that are happening on all sides about this.

NPR had a story about this recently.

Specifically, it was about the state of Utah becoming the first in the country to provide protections to free-range parents.

NPR noted that to do this they had to make some changes to the laws around child and neglect.

They literally changed the definition of neglect.

One reason for this is so that parents don’t have to be afraid of providing an environment where children can learn to be independent.

From the legislature’s perspective, it’s setting a legal ground where the law isn’t getting into parents’ business.

From the perspective of the state senator who was interviewed for the NPR article:

The public is more fearful for children’s safety nowadays than 20 or 30 years ago because of what the public sees on TV and social media.

But this state senator also feels that children being raised today are safer than previous generations.

So in sum, this is about is one state’s choice on how to navigate the legislative terrain of free-range parenting.

Now, as I said, that’s just one state’s take. Not all states take the same approach.

After all, there are 50 states. So that’s an opportunity for many, many different legal interpretations.

As more time goes by, I suspect we will see more and more stories about these types of law has been passed.

Already in 2019 for example, South Carolina has introduced a bill to decriminalize a couple of things that parents have been caught doing.

The proposed new law would change the enforcement process for the department of social services and law enforcement.

And they have an important quote.

“This is not saying you can treat your children badly,” says Vincent Sheehan.

He’s the legislator who introduced the bill. And the reason is he’s all about giving parents more freedom.

Now, as more states implement these types of laws there will be more here to talk about.

I think we can make a couple of observations.

One is that a big part of this debate revolves around ideas of freedom, and how much freedom parents really have.

And another big part of this debate is about the role that government should or can have in telling parents what to do.

And in that sense:

This debate is not unlike countless other debates that occur in America today.

Now we don’t advocate for one side or the other.

But we do believe in being educated, and informed citizens.

And that has been the goal of this introductory article on free-range parenting.

As always, thanks for reading!

By Creative Parenting12.16.20Family, TipsLeave a Comment on What Is Free-Range Parenting? 5 Essentials To Know